Former Store(s)  in Location(s): (#1) 3 Maple Street: Leggett’s, then, McSweeney’s ( #2) Main Street: Meyer’s Store, store  was to right of Proller Building  (The Village Store in picture below)  circa 1975 (per Facebook posts)

Building Still Exists?: (#1) No, Building was torn down to build new bank with drive through; now (September 2017) Saratoga National Bank (#2) No, Building burned down in 2008 along with Proller building to left

Marion Boutelle worked for Les and Marge Perry for years.

Lyman Martineau ran the store. Anita Martineau Wester (his sister) worked summer with him when she was 13 or 14. That was early 80’s.

Mary Lou Pike was manager at the one on Main Street for a long time, Her daughter-in-law Lynn Marie Harney worked there part time.

Grace Ford worked in Pearl’s for many years 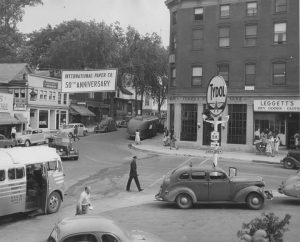 Corner of Maple and Main, Corinth, NY in 1948 showing Leggett’s Department Store which became McSweeney’s then Pearl’s. Above bus, you can see “S” and “ORE” of Meyer’s store which became future site of Pearl’s Store. 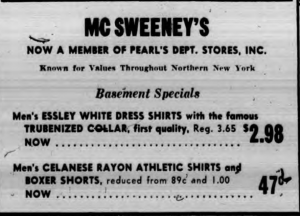 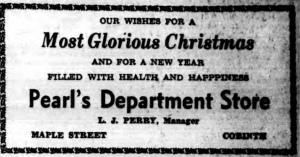 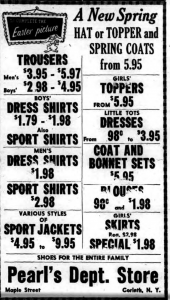 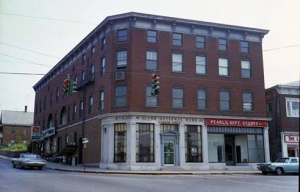 The Pitkin Building (also referred to the Bank Building) that once stood on the corner of Main and Maple Streets.. It was demolished by Marine Midland Bank to make way for their new bank (circa 1975) . Marine bought entire corner plus the movie theater on Center street Previously was Manufacturers National Bank. Current location is parking lot for Saratoga National Bank. (Corinth Museum collection and Facebook posts.) 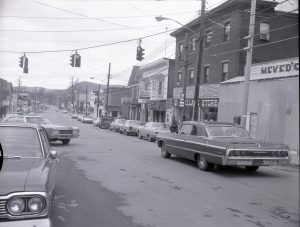 Meyer’s Store (prior to Pearl’s) (Corinth Museum collection) Lights are at intersection of Sherman and Main. Lower left care is almost at Maple Street. Based on cars, photo was probably taken in 1960’s. 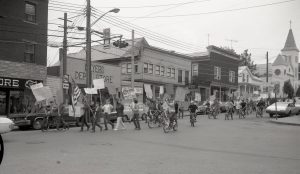 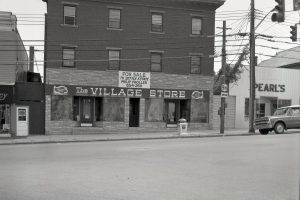 Pearl’s moved to across Main Street to the right of the Proller Building housing what is in this photo The Village Store. Picture circa 1975. Compare to photo above. This location used to be Meyer’s Department Store. (Corinth Museum collection) Building was destroyed when the Proller building burned. (Linda Rhodes Walsh, “You’re Probably from Corinth, NY If …, Facebook Group) 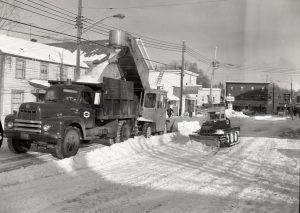 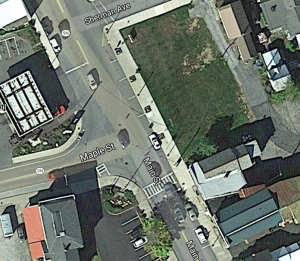 View from corner of Main and Maple Street (today). 3 Main Street store was located on the right (current bank drive through) and Main Street Store was to lower left. (now vacant lot).

Current (August 2017) view of where 3 Maple Street store was. It was to left of building shown, the entrance to the Saratoga National Bank drive through lane and parking lot.

Current picture (2016) of site of Main Street store. After Proller Building and Pearl’s burned down (2008), lot was cleared. They wanted to build an apartment building, but there was not enough space for off street parking

“I remember one Christmas in the mid 1950’s I got money from my grandfather. I walked upstreet to Pearls and bought my first pair of penny loafers.  There were boxes of shoes stacked in one section of the store and I picked out my own pair. I felt so grown up!”  Barbara Tellasky

“I got my first pair of bell bottoms in Pearl’s. They were bright green. LOL” Annette Duguay Pope

“LOL…I remember Pearl’s…my mom and I used to go there.”  Cindy Brunell