Paul I. Pearl, the founder of Pearl’s Department Stores was one of nine siblings. All siblings shared the same father. Sam and Ethel’s mother died in Ethel’s childbirth. Their father remarried and had seven more children. No distinction was ever made about being half-siblings. Of the nine siblings, six siblings were directly involved with the Pearl’s chain.

Below, a family portrait, with spouses, of the Pearl (Osovitz) siblings. Ethel and Sam used Ossovitz name, other siblings changed name to Pearl. 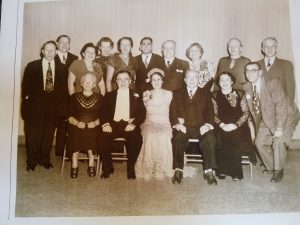