Pearl’s Department Stores, Inc. ceased in March 1988.  Here is an article from the Watertown Daily Times describing the closure. Note there is an error in the article, it was Paul I. Pearl, the founder of the chain who died on July 25, 1987.  I have updated the article in []’s to reflect the correct information.

A retail chain founded 70 years ago to provide for the basic apparel needs of loggers and other mountain people” is folding up its tent.

Pearl’s Department Store chain, made up of 18 outlets ringing the foothills of the Adirondacks, including five north country stores, is being liquidated or sold, according to marketing director Richard G. Kagey.

Mr. Kagey said the stockholders, at a Feb. 13 shareholders’ meeting, decided to opt-out of the retail business.

Pearl’s Department Store is a closely held corporation made up of descendants of founder P.I. Pearl.

With the death one year ago of Mr. [Paul I.] Pearl,[s] [, his] son and [the] successor at the helm of the department store, Elliott Pearl [and the] other [immediate family] relatives decided they wanted out of the family business.

We were going for a whole different market and the response was happening,” he said.

But, he said, the process is a time-consuming one, requiring a major commitment from the shareholders. It was a commitment family members were unwilling to give.

Mr. Kagey said the corporation is negotiating for the sale of the Alexandria Bay and Theresa stores to Margaret J. Sweet, manager of the department store on the river for the past 14 years. No purchase price was disclosed.

He said those outlets will remain open, as the sale is conditioned upon the ownership being transferred as an ongoing business.”

He said the Clayton, Canton, and Malone outlets are earmarked for sale and liquidation. In Carthage, Pearl’s leases the building and is in the process of terminating the lease agreement.

The first Pearl’s outlet was actually a flat-bottom boat floating Lake Champlain, said Mr. Kagey. He said the corporation was moved to Vermont and later to a warehouse in Malone, from which the corporation operated until 1957 when it shifted to Glens Falls. 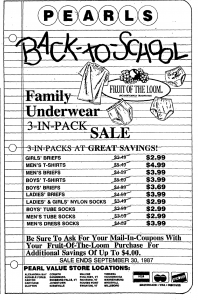 This ad for school opening list all stores in operation just prior to the chain’s ceasing operation in 1988 (Press-Republican August 7, 1987 p12)