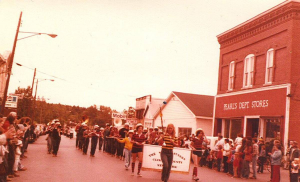 Pearl's In Keeseville NY around 1968

If you grew up in upstate New York ("the North Country") or in northern Vermont anywhere from the 1930s through the 1980's you probably remember a "Pearl's Department Store" or just "Pearl's"  in your hometown and/or a neighboring town. If you grew up in Vermont, you may have shopped at Nate's, Hill's, or Fienberg's. In New Hampshire, you may have known Hirsch's. You went there with your Mom or your friends. You bought your Wrangler jeans, your school clothes, a Christmas gift, some furniture (Fienberg's and Standard Furniture),  and wallpaper. Pearl's and the others were there before the Kmart's, Ames, Walmart's, Ashley's Furniture, and the Northway (I87) in New York and the interstates in Vermont and New Hampshire. You may not have known that the store was part of a much larger network of stores or about their fascinating history. This website is the story of that family of stores!

Welcome to the "A Family of Stores" website where the history of Pearl's Department Stores, Inc. and other family-related stores* (Pearl's (Chateaugay)  Hill's, Ruby's, Waldman's, Shapiro's, Nate's, Witt's, Fienberg's, Hirsch's, Standard Furniture, Alwards, and more ) is being documented.

This website is an ongoing project and a labor of love. Please use the menu on the right to go to the various chapters and sections. Start with Part 1 Chapter 1  Introduction to A Family of Stores which gives an extensive overview and an interesting Google map showing the locations of the various stores, then check out the other chapters in Part 1. Part 2 - Select Store Family has the store pages. Store pages are being added and updated as research and time permits.  So far, check out the two Albert's Department Stores (Canton (PA) and Sayre (PA)  and Pearl's stores in Corinth, Enosburg Falls. Keeseville,  and Willsboro.

*This project started as a history of the Pearl's Department Stores, Inc. chain since that was the one my father was involved with due to my mother's family. However, as I was/am working on my family's genealogy (concurrent labor of love) I started to uncover (along with my own memory) that there were many more stores associated with my "extended family". By "extended family",  I mean relatives of relatives who are not related to me by blood (i,e. consanguinity). I do not think there is a word for this type of relationship other than some sort of "in-lawness". For example, my sister Marlyn Cohen married Larry Shapiro whose parents had a Shapiro's store started by Larry's paternal grandfather. Larry's father had brothers as well as his father who had stores under the Shapiro name around Saratoga Springs, NY.  I consider the Shapiros part of my "extended family" and thus their stores part of "my family of stores".  The advantage of this consideration is both of historical significance (I am not aware of others documenting the family from a store history.) and of relevance to Marilyn and Larry's children who want to know about stores in their family other than the ones related to their mother. When you peruse this website, you will see how people were "related".

Also, it is notable that 1) a number of relatives started their own "mini-chains" after working for Pearl's Department Stores, Inc., and 2) that some of my relatives met their spouses due to their working in a family store.

Another factor in this history of stores was that my relatives are Jewish and so these stores were the proverbial "Jew" store in the many small towns where they were located. Since there were so few Jews, many of the Jewish families knew each other through business or a local or nearby synagogue, so it was not uncommon for a daughter from one Jewish merchant to marry a son or grandson of another Jewish merchant in a nearby town and thus extend the family of stores.